Insider’s Report on an evening with Jon Ashworth

Ludlow CLP have been fighting the drastic cuts to our Health Services, alongside campaigners in Shropshire. Our CLP Women’s Officer and rural health activist, Tess Finch-Lees, made sure our voice was heard, when Jon Ashworth, Shadow Secretrary of State for Health, recently visited Telford CLP and invited questions from the floor… 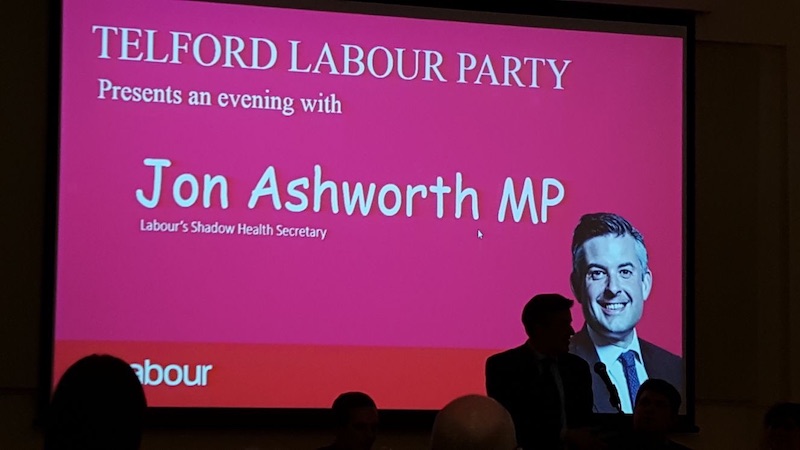 “On 8 November, Telford CLP hosted an evening with Jon Ashworth, shadow secretary of state for health, which I had the pleasure of attending. Having given an informal talk, Jon opened up questions to the floor. I asked about his plans for implementing the motions passed at conference in Brighton. Specifically with regard to the NHS reinstatement bill, the rejection of the Five Year Forward View (FYFV) and working with Labour councils to give them clear direction in order to block Tory Sustainability and Transformation Plans (AKA, Slash, Trash & Privatise).

I impressed upon Jon, that those of us holding the front line against savage Tory cuts to our NHS, are in dire need of reinforcements from him and that implementing policy agreed at conference was a matter of urgency. The NHS is running out of time and is crying out for the party that created it, to save it.

Jon agreed that the new policy would have to be implemented but didn’t outline any concrete plans for doing so. In a one on one conversation afterwards, I also asked Jon if he would sign up to the #NHS takeback pledge. He said he needed to talk with the leaders’ office and health campaigners before committing. I offered to expedite a meeting with leading academic Allyson Pollock, if that would help. He declined the offer but kindly agreed to continue the conversation with me via email, which I look forward to doing. Watch this space for further developments!”