As budget fails community hospitals and our NHS, we fight back!

There is much to concern us over the failings of this week’s Budget. Campaigners and Ludlow Labour have been particularly focused on our NHS crisis, as winter falls. Yet, as Simon Stevens, CEO of the NHS anticipated, “the budget for the NHS is well short of what is currently needed”. The effect on our Minor Injury Units, DAART services and in-patient community beds may be harsh, as the Clinical Consulting Group scrabble for financial savings. Our own MP, Phillip Dunne, is a Health Minister who has voted for these cuts.

However, the authorities are meeting with serious local resistance. This year, we have seen a surge in local passion to fight for decent hospital care. Access to community hospitals and Minor Injury Units can be a matter of life or death for a population scattered over a huge rural area, with roads that can become impassable in winter. Community Hospitals with services “under review” are Whitchurch, Oswestry, Bridgnorth and Ludlow. We hope these services will be improved – however, Bishops Castle hospital was recently mysteriously closed and reopened, following protest. It is not yet clear that all community hospitals will remain open with full services.

Recently, we joined other campaigners under the banner of ‘Save Ludlow Hospital’. Labour were working alongside: The League of a Friends of LCH, Ludlow Town Council, Defend our NHS, Save Ludlow Maternity Unit, Ludlow GPs, Lib Dem Members and local citizens. A Ludlow Labour Member explains: “We confirmed the urgency of the situation and within two weeks we had scheduled a public meeting (ensuring Phillip Dunne could attend).” 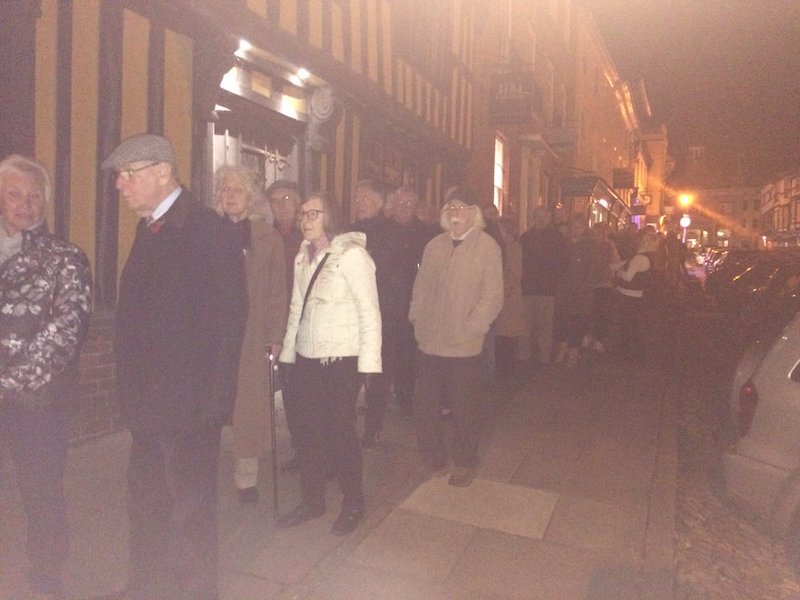 At the meeting, Dunne had little to say in response to distressing personal experiences shared by protestors. The streets were teeming. With 400 inside the meeting and 200 standing outside, there were shouts of “Dunne, you don’t work for us!”

Janet Cobb, who leads Ludlow Labour Policy, including our response to the NHS crisis, said, “I’ve rarely seen a Minister look so flustered.”

Another Member comments, “There was a lot of anger. Philip Dunne failed to put people’s minds at ease about the future of the NHS. John Higson, Branch Rep for Bishops Castle, Clun and Chirbury, suggested that people should show their unhappiness over the NHS at the ballot box at the next election. The Mayor, Tim Gill, said that this was only the beginning of the campaign.”

There were more distressing scenes this week, as a woman lay with a head injury in Ludlow in the rain for almost two hours before an ambulance could reach her. In the same week, 21 ambulances were held outside the A&E at the Royal Shrewsbury waiting to take patients, who could not leave because there were no beds to which they could be discharged. Current proposals suggest scrapping one of the county’s two A&E’S. We need our A&Es and we need our community beds!

Julia Buckley, 2017 Labour Parliamentary Candidate and Councillor for Bridgnorth, called the recent coming together of campaigners “inspiring.” She warned authorities of a united front across Shropshire, saying, “we will not compete to save our own community hospital at the expense of anyone else. From Bridgnorth to Ludlow, to Oswestry and Bishops Castle, we will cooperate in our shared efforts to safeguard services, now and in the future.”